There are an estimated 250,000 persons with disabilities (PwDs) in Kosovo, and of the numerous challenges they encounter, a key one is the lack of opportunity to be included in the labour market. This limits their economic and personal independence, negatively impacting upon their self-esteem and quality of life. The Kosovo Law on Vocational Ability, Rehabilitation and Employment of People with Disabilities (LAW NO.03/L-019) obliges institutions to employ at least one PwD in every 50 employees, but it is not widely implemented. Although data is very limited, the Kosovo Forum estimates that 99% of PwD in Kosovo are unemployed.

Despite their substantial negative environmental and health impacts, the use of single-use plastic bags is still widespread in Kosovo - provided by shops and markets for free in high numbers, usually used once and then thrown away. Due to limited waste management infrastructure, including collection and recycling facilities, the negative impact of plastic waste in Kosovo is higher than in countries with more advanced waste management systems. Although both urban and rural landscapes are scarred by the plastic waste, there is still a significant lack of environmental awareness in Kosovo. Even plastic bags labelled biodegradable can leave micro-plastics in the soil, which release toxins, proven to cause cancer. The burning of plastic contributes to air pollution which often reaches hazardous levels. Collective action to reduce plastic waste is urgently required in Kosovo. Easy alternatives, such as reusable bags, are not promoted and are often not available. Providing an alternative to single-use plastic bags along with environmental education on the impact of plastic waste, can actively reduce the amount introduced into the environment, in turn supporting sustainable development.

This six-months project (November 2020 - April 2021) financially supported by the Swiss Cooperation Office in Kosovo will strengthen the capacity of PwD and support them to produce reusable bags from leftover/waste textile, enabling them to be included in socio-economic life and become advocates and contributors to environmental protection in Kosovo.

The project is implemented in partnership between the Balkan Forum, HandiKOS, and is additionally supported by companies and Non-governmental Organisations including NUKA HOME, Gjirafa, Balkan Green Foundation, Meridian Express, BYQMA and LDS. 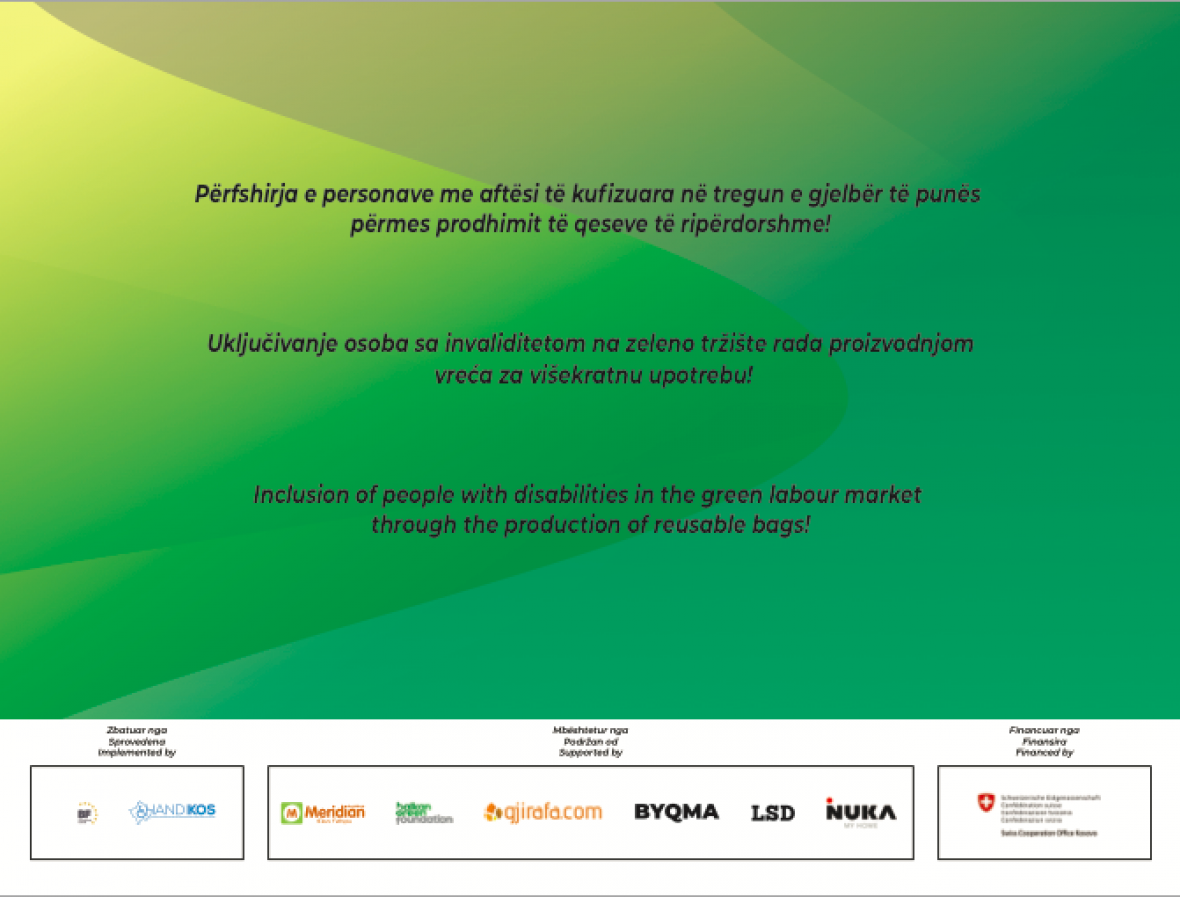 Equipping, Empowering and Employing Youth, Women and Other Disadvantaged Groups in five Municipalities of Kosovo

The World Bank's Country Partnership Framework (WB CPF) for Kosovo 2017 - 2021 highlights that although Kosovo’s economic growth has outperformed its neighbours, it has not been sufficient to significantly reduce the high rates of unemployment, and Kosovo remains one of the poorest nations in Europe. The Labour Force Survey (LFS), published by the Kosovo Agency of Statistics (KAS) shows that in the first quarter of 2019, two-thirds of the population in Kosovo is of working age population (15-64 years old), with a rate of participation in the workforce of 38.7%, an employment rate of 28.2%, and an unemployment rate of 26.9%.

Overall unemployment figures for Kosovo are stark, but digging into those numbers tells an even more disturbing story. Women and young people are significantly more likely to be unemployed – and indeed, the rate of unemployment among women 15-24 in Peja, for example, is 62.9%, more than double the national average for all groups. Minority ethnic groups and people with disabilities are also excluded from the labour force in significant numbers. For this reason, efforts to improve the rate of employment generally are not likely to succeed unless there are targeted programs to address the barriers to employment for disadvantaged groups.

The project “Equipping, Empowering and Employing Youth, Women and Other Disadvantaged Groups in five Municipalities of Kosovo” supported by the European Union Office in Kosovo aims to support additional active labour market measures such providing tailor-made support for training, on-the-job training, internship and self-employment to the disadvantaged groups in Kosovo. Additionally, the Project will support the development of start-up enterprises as an opportunity for creating employment prospect for particularly most vulnerable groups in labour market.

Target groups include disadvantaged communities with lower than average participation in the economy: Youth, women of working age, People with Disabilities and ethnic minorities including Bosnians, Serbs, Roma, Egyptians and Ashkali individuals. The project will address the specific needs of these groups in five municipalities, Istog, Peja, Klina, Deçan and Junik.

The project will be implemented during the next 24 months (2020 - 2022) in partnership between the Balkan Forum, Syri i Vizionit, and Municipality of Istog.