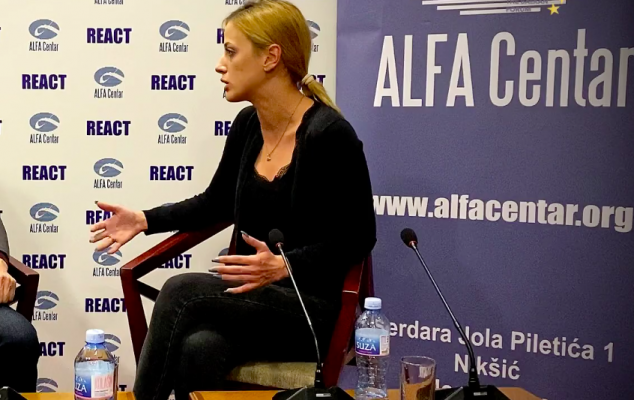 A short interview with the Balkan Forum. Her views on countering nationalist narratives in the Western Balkan region: "Thanks for the interview invitation. We are at this year's REACT camp, which is currently dealing with these topics, what we need most for the development of a democratic society, democratic Montenegro and the entire region. It seems to me that the facts are not in our favor to be a democratic society, both for Montenegro and the countries in the region.

We are definitely facing a brain drain, with young people going to different parts of Europe. As we go to democracy, we are a society that is quite underdeveloped, the border between freedom of speech and hate speech is quite unknown.

What is necessary to separate when we talk about the situation in Montenegro and the position of young people is radicalization as an active process, about the subjects and objects of radicalization, it seems to me that political organizations and religious communities are the most common actors, those who divide young people, instead of connecting them and talking about those similarities that should connect them.

Camps, socializing, student exchanges, are some of the events that can connect young people to meet their colleagues from the region and simply learn that these differences can connect them and that we simply do not live next to each other but with each other.

It seems to me that in reality, young people are eager to socialize and meet their peers from the region, but we simply have a great influence of the media, unfortunately, so the media are a serious factor in the collapse of democratic society.

So I think that all those main actors in social events in Montenegro who need to work to bring young people together, to combat hate speech that is mostly distributed through social networks, they work to stratify our society when we talk about some moral values and those moral values are far from the European values we want to cultivate.

I would really say that young people should get to know each other, socialize, forget the differences, get to know them, but not let them be a barrier, but differences that will unite them and just try to build a stable region with young quality people who indeed in this moment we have."